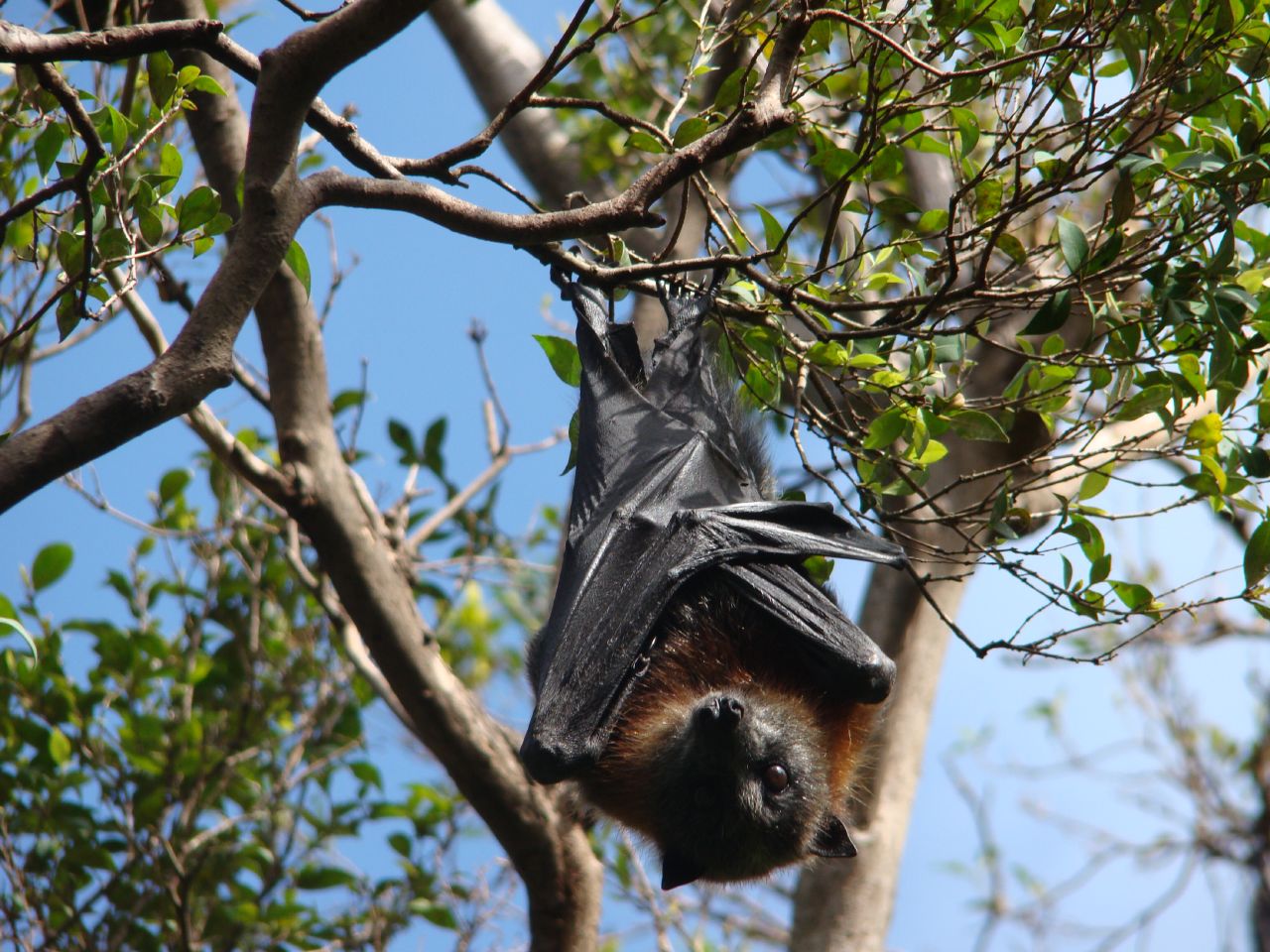 How Fruit Bats Spread Ebola and Hendra Viruses Without Getting Sick

Flying foxes– aka fruit bats or megabats— can harbor viruses that are strong enough to tear a human body apart without exhibiting a single symptom.

Or more precisely, while viruses like Ebola and Hendra virus set off violent (and often deadly) immune system chain reactions in humans, fruit bats’ immune systems are able to nip viral infections in the bud right away.

Unfortunately, that means that healthy and highly mobile bats can inadvertently end up transporting viruses like SARS, MERS, Ebola, and Hendra to new locations. However, studying fruit bats’ ability to control viral populations without collateral damage may eventually help humans learn how to coexist with our own volatile immune systems.

A team of self-declared “bat immunologists” at CSIRO in Australia, led by Michelle Baker and Peng Zhou, analyzed the genomes of two megabat species and found that megabats have surprisingly few of the biochemical alarm bells– called interferons–that tell the body’s cells to brace for battle. Humans have about 11 interferon genes, and our immune systems only switch them on in confirmed states of viral emergency. However, megabats only have 3, and they leave them switched on all the time. In humans and mice, having the immune system on permanent red alert would cause depression symptoms, tissue damage, and death, but the bats seem to be fine, according to the CSIRO team’s veterinary collaborators.

“We think the interferons are just one part of the puzzle,” Baker says, but understanding how flying foxes tolerate chronic immune system battle chemistry could eventually lead to treatments for autoimmune diseases.

One of the reasons I like this story is because there are several different angles that could be played up or down; the bats’ role viral outbreak epidemiology, the controversy about how to manage virus-spreading bat populations (some people want to kill them but they’re also important pollinators), and the immunological weirdness are all pretty interesting.

A few Australian publications have run blog posts on it, but Baker says so far I’ve been the first international reporter to reach out. If this is a story you’d be interested in, let me know!

Why The Pitch Didn’t Quite Land:

This pitch is part of my ongoing attempt to set myself up as a “go-to guy/gal/enby” for immunology and disease ecology stories. (See? I can write about interferons & cytokine storms without boring you to tears! See?)

The idea being that eventually, when the editors I work with hear about an upcoming immunology study they want to cover, they’ll think, “Oh, yeah. I should ping Diana and see if she can write this. She’s good at writing up immunology.” …That’s the dream.

Unfortunately, this study, while fascinating  for immunology majors, is tightly connected to previous studies that have been covered before. For instance, in 2012, the CSIRO team found that fruit bats also have lots of genes that protect their DNA from stress. They hypothesized that since flying is high-intensity activity that produces lots of free radicals (aka “Reactive Oxygen Species”, which are notorious for their tendency to wreak havoc on DNA and RNA, contributing to cancer and other cryptic health problems), the bats must have evolved their extraordinary stress response in order to cope with the stress of flying. That’s not the sort of story that science journalists ignore, and the bats carrying viruses issue got a good bit of attention at the height of the Ebola outbreak.

Finding a topic or a lane in science journalism where you can become a “go-to” writer is a tricky balancing act. I’ve also been working toward becoming a go-to for stories about genes having multiple effects, but selling “genetic non-determinism” and “gene expression” is tough. You want to find beats where there’s a lot of audience interest but few dedicated reporters, and since both freelancers and staffers base their news decisions on audience interests, those sweetspots are relatively few and far between.

Stuff from My Notes That Didn’t Quite Make the Pitch: