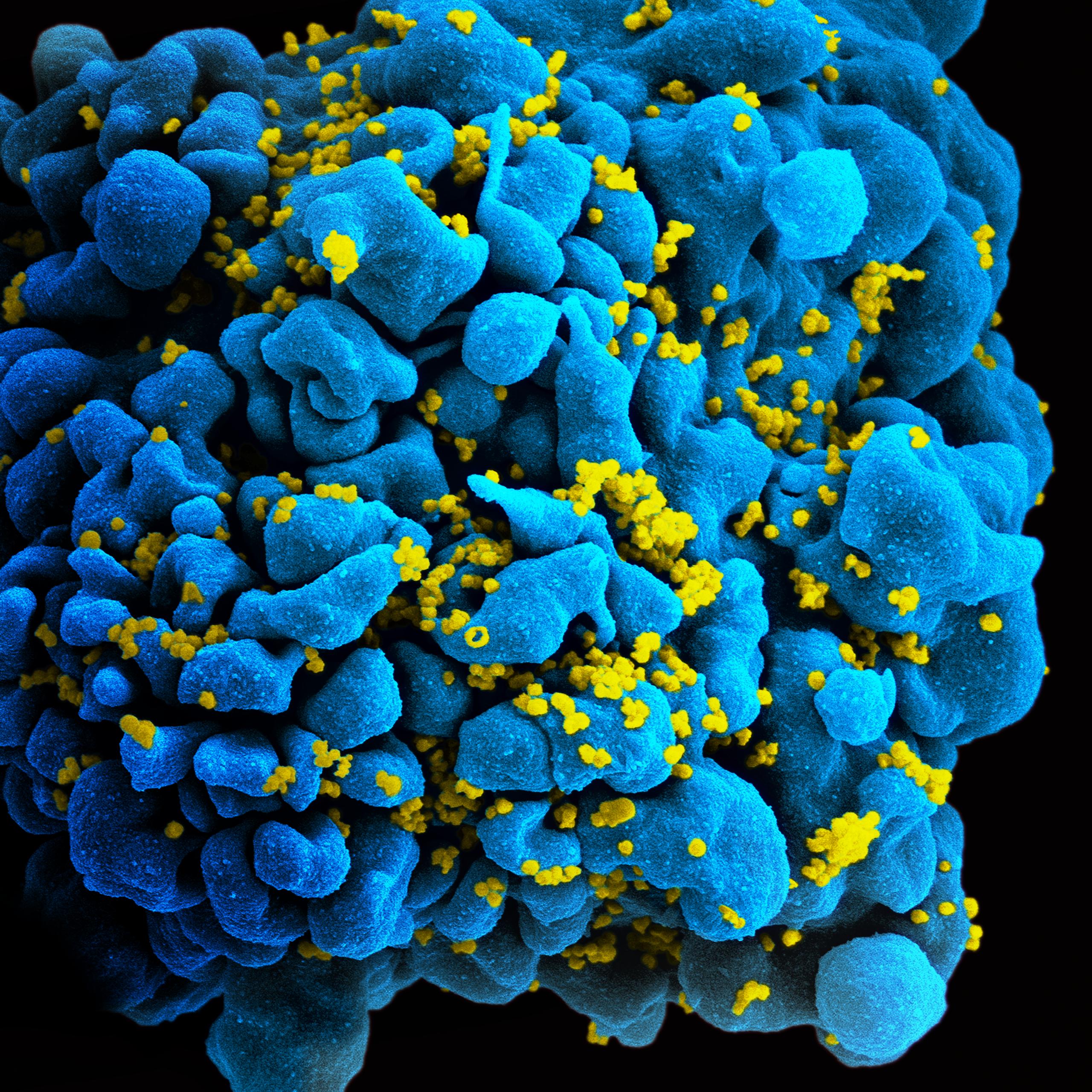 [Electromicrograph of an HIV-infected T-cell via NIAID & CC2.0]

Anti-retroviral therapies can block HIV’s attempts to infect new cells in patients but do nothing to get rid of HIV sleeper cells that are already in the patient’s blood stream. The immune system can’t spot infected cells unless the HIV is actively building viruses.

However, a paper in PLOS Pathogens may have revealed an unexpected ally in the fight against HIV–the sugar coatings on immune cells. Having sugars on the surface of a cell isn’t unusual; surface-sugars serve as ID-badges that allow immune cells to tell self from not-self. But they’re usually thought of as relatively passive in cell-to-cell communications. This study indicates that yanking on a certain class of surface sugar can start a chain reaction that forces HIV into the open.

“Even though it seems kind of counter-intuitive to wake up the HIV, it really boils down to: the infected cells will die if we wake them up,” says the study’s senior co-author Satish Pillai of the Blood Systems Research Institute in San Francisco.

The paper came out on Thursday, but a Google News search turned up zero hits.

Sugars, in general, are relatively underused in next-gen medicine strategies–while genes, proteins, and RNAs hog all the glory–but they may have been potential allies ambushing HIV, hiding in plain sight.

Why It Didn’t Quite Land:

(A) Like I said in the tegu lizard post, I need to work on coming up with stronger endings for my pitches. Pointing out that no one else is covering a story can help convince editors that this story is unique, but it might also make them think, “Well, if no one else is on this story, is it really important?”

In marketing emails, you want to end with a clear “call to action”, something that says to people “Now that I’ve convinced you I’m awesome, I want you to [sign up for my newsletter/ email me back with times we could meet / read my blog/ pay me to write more about this thing!]”  And like it or not, when you’re a freelance writer, pitching to editors means that you’re basically sending super-specific marketing emails about a story you want to tell.

(B) However, I think the main reason the pitch didn’t quite land was that in spite of the “Sugars don’t get enough credit, dude” angle I’m pushing, the paper is about an interesting protein–GAL-9–that does something to cells that looks like it might potentially help us fight a scary disease, but we don’t know whether it’ll work in people.

(The fact that they gathered the HIV infected cells from actual patients who are currently on anti-retroviral therapies and living with HIV helps them, but since those cells were isolated into petri dishes for the experiments, at this point, they’re still making an educated guess about what would happen with a whole immune system in play.)

Loads of papers pointing to a promising molecule that might cure a disease come out every week, prompting some editors to label pitches off of those studies as too “Gene of the Week” or “Too Protein of the Week.”  Editors need the story to have an obvious hook that makes it stand out from the crowd. Researchers with interesting backstories,  studies that mark the “first time scientists ever did [X]”, papers that challenge the public’s ideas, cute animals, well-executed metaphors, and interesting comparisons are just a few of the most common “hooks” in science news stories.

The “Sugars-are-Underrated” approach was my way of attempting to get around the blending-into-the-crowd problem, but general readers are not necessarily going to care that sugars get less attention than proteins.  They probably don’t think about proteins in the 1st place when they think about HIV, so the whole “Surprise! You thought this was all about the proteins, but the sugars can actually fight back too!” probably wouldn’t work outside of a fairly scientist-heavy audience.

Also, truth be told, I have a tendency to lean on the “[Science Thing X] is so under-rated in [Scientific Field Y]” a lot.  I’m always trying to convince editors editors that they need to pay me to write microbiology stories on fungi (“They’re literally still underground, dude!), neuroscience stories about the neurons outside of your brain (“People just don’t realize how profoundly influential the somatosensory neurons are…”), and “explainer” stories about molecular biology (“Hey, I bet your readers haven’t even heard of Alternative Splicing yet…. ) Yeah. I blame my Alma Mater for my hipster tendencies.  (Christopher “It-goes-to-eleven” Guest went to Bard…Also, Steely Dan is kind of Bard’s fault.)

At the same time,  editors always want to highlight the stories that no one else is telling, so the “[Science Thing X] is so under-rated in [Scientific Field Y]” is often a good angle to use, once you’ve made sure the facts back it up.

It just also helps to have other angle strategies in your repertoire, too.

Stuff That Didn’t Make the Pitch:

[Diagram of an HIV capsid (or virus shell). The stuff inside the blue circle is the virus’s genetic material. Image via AJcann & CC 2.0]

Immune cells in HIV-infected people are looking for a needle buried deep in a hay stack…Except the needle can also hijack and destroy their comrades’ bodies from the inside out. And could be lurking in any one of the immune cells.

Whether this strategy would actually work in practice depends on how quickly the infected immune cells die after the viral genes “wake up”.  Figuring that out requires lots of math and computer simulations that focuses on what factors allow HIV genes to hide for a long time and how quickly they’ll burn through immune cells once active.

(Oddly enough, I know an HIV “fancy math” researcher from a science writing workshopping group called Neuwrite.  Her name is Alison, and as far as I know she did not secretly go to high school with any well-known science writers….But she did just email me about these two new anti-HIV antibody papers out in Cell. This one is about a hybrid antibody that combines the binding abilities from two natural ones, and this one is about a different synthetic antibody that has a hinge so it can shapeshift and kill more different HIV strains… 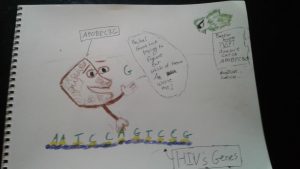 [A very scientific dramatization of APOBEC3G’s job.  It doesn’t have hands or eyes in real life. Vif’s resemblance to a shark is exaggerated for comic effect. Drawn by me. ]

When Pillai and company dosed infected cells with Gal-9–the sugar-binder, the cells started making more 4 or 5 times as many APOBECG3s as cells in the control group. (A few their cell samples  actually started making 10-20 times as many APOBECG3s with the Gal-9 boost. ) There’s a solid chance those APOBECG3 numbers are large enough to overwhelm any Vifs the virus makes.

Best case scenario: When Gal-9 sets off a signal cascade in the sugars, the hidden HIV starts building, the infected cell dies, and the virus copies it makes will be so full of typos that they won’t be able to infect any new cells.

Worst case scenario: You wake up all the HIV and accidentally poison the healthy immune cells by overdosing them with Gal-9.

Obviously, more experiments and lots of simulations are needed before anyone can try this in people.

Researchers found evidence that hidden HIV can be (partially) thwarted by manipulating the sugars in immune cells. 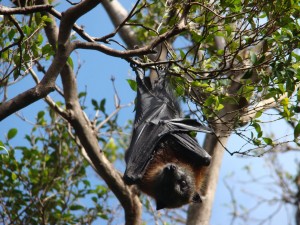