The Case of the Looming Octopus 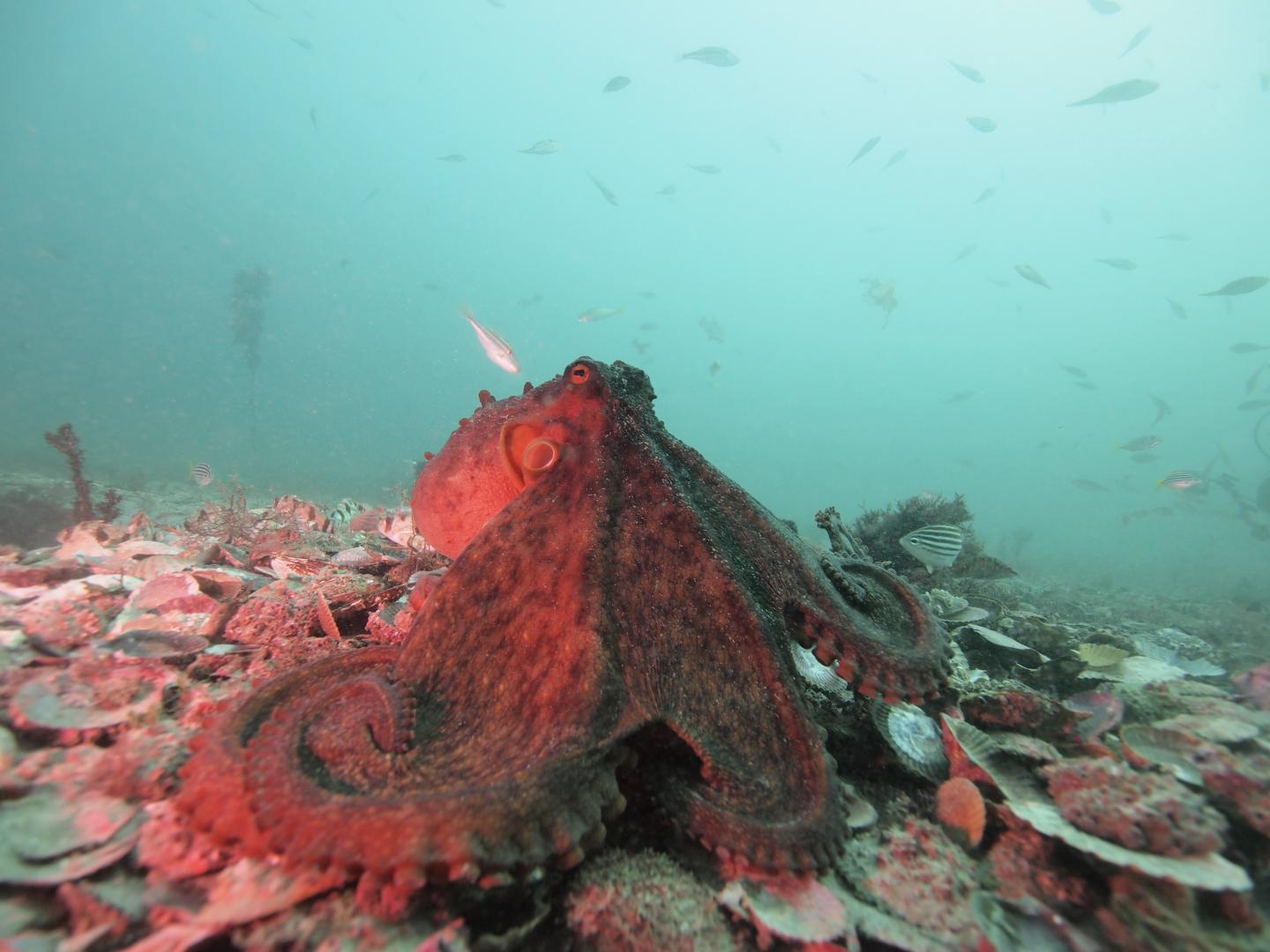 How Octopuses Communicate through their Color-Changing Skin

Turning dark and “looming” is a warning; white with black splotches means surrender.

When a philosopher and a marine biologist set up cameras to record octopus’s mating behavior, they saw something they didn’t expect.

Octopuses- which many biologists describe as solitary, cannibalistic predators- appear to use their skin to send each other signals, according to their study in Current Biology.

The marine biologist, David Scheel, describes one example from their footage: “The first octopus comes up from the back, being very dramatic– standing tall and turning very dark. Then it tussles with the other octopus for a minute, until that octopus turns pale.”

The second octopus in the clip swims away, but when the first octopus approaches a third octopus, the third draws itself up to its full height and turns very dark, as if to say “You can’t push me around!” The researchers saw this pattern again and again in the footage. Biologists have seen squid signal to each other with colors before but not in octopuses, which are reputedly lone predators.

Octopus skin isn’t just for camoflage; it’s also a tool they can use to send messages to one another.

In other words, asocial octopuses have body language!

Why The Pitch Didn’t Quite Land:

In this case, I made a rookie mistake.  I was so excited about the prospect of writing about one of my favorite animals that I rushed the pitch out.  Without googling first.

Although I got my pitch out before the paper’s embargo lifted, National Geographic had covered the same story in July after finding out about the story at a conference.

I’d been scooped before I even realized I had a story.  (*Retreats into “cone of shame”*)

On the bright side, I correctly recognized it as a potential NatGeo-style news story, but not clicking further back in David Scheel’s Google News mentions was a derp on my part.

Some outlets care more about avoiding stories that have already been written up than others, but the fact is: There’s no shortage of stories in science. Thousands of papers debut every day. Sure, many of them contained faked data, botched laboratory techniques, wrongheaded conclusions, and undisclosed biases. But there are plenty of papers covering weird and wacky animal behaviors to go around. Writers who want to claim turf on the animal beat have to keep an eye on quirky second string journals and develop a knack for spotting hidden gems.

As a rule of thumb, if it’s an invertebrate-centric and/or animal behavior study posted on the Current Biology section of EurekAlert, you can safely assume that Ed Yong is probably going to cover it. That didn’t happen with the octopus story, but it’s happened enough times that I use it as a guideline for picking which stories to chase each week. (Here’s one he wrote the other day, although the study’s from a different journal.)

I learned this rule the hard way this past April when I was trying to get through to a cancer biology source. The source’s previous call had also been with a journalist, had run 40 minutes long, and yet the source was totally cheerful. When he started throwing around the phrase “take-home message”, I got suspicious. When I asked him which publication he had already talked to, he told me NatGeo. (At which point, I was like, Dammit! I’ve actually had both cancer biology and invertebrate zoology training! I totally could’ve rocked the contagious clam cancer story!) But oh, well. C’est le vie.

Stuff from My Notes That Didn’t Quite Make the Pitch: