Space of autonomy: between Twittersphere and urban spaces – Recap of a talk by Dr. Manuel Castells 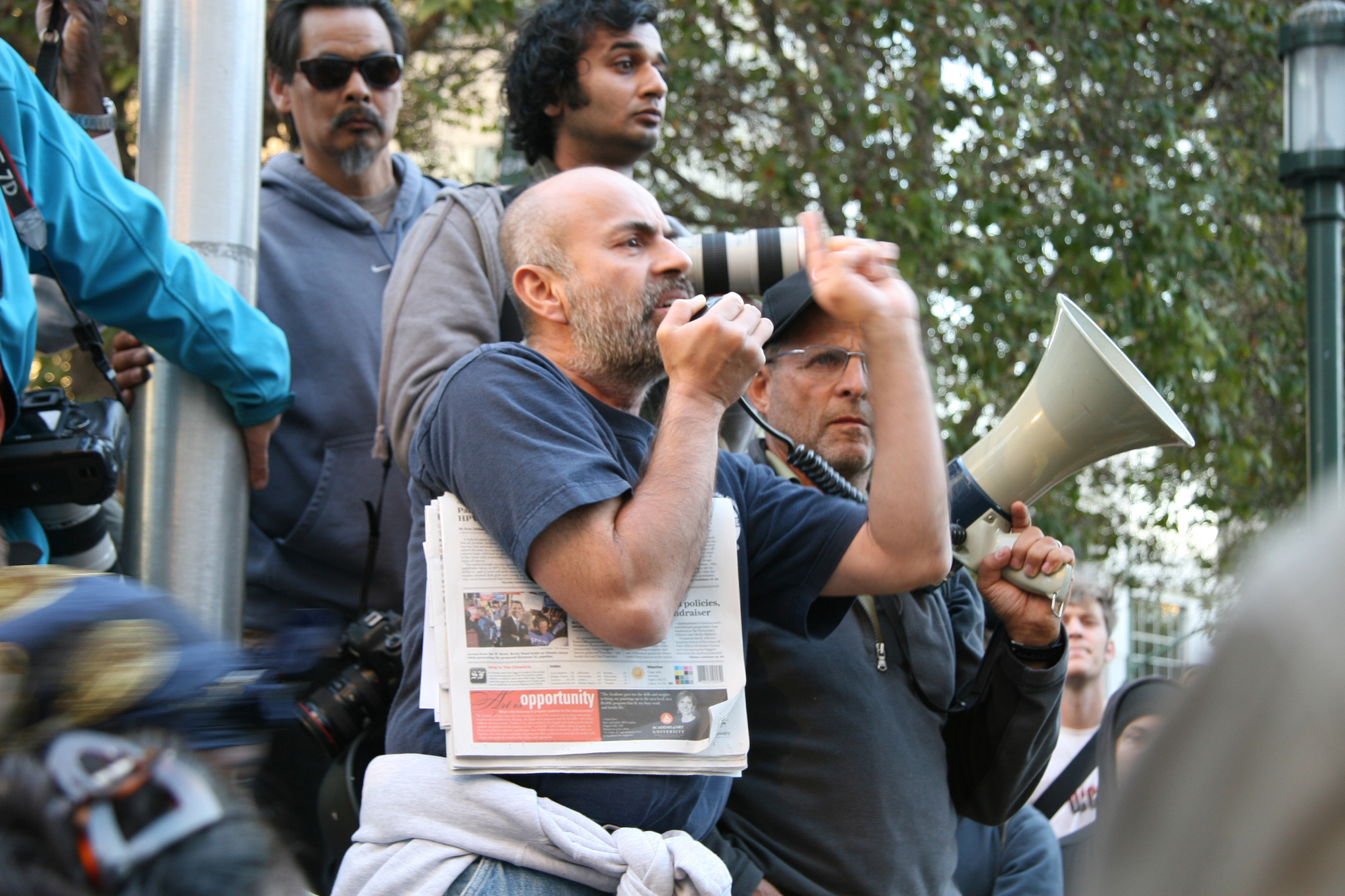 The Space of Autonomy: Cyberspace and Urban Space in Networked Movements

Manuel Castells been exploring the relationship between urban spaces and social movements for decades, but in recent years, he’s turned his attention toward social movements as they mobilize through social media. In this talk, he was summarizing/expanding on ideas that he wrote about in his most recent book Networks of Outrage and Hope: Social Movements in the Internet Age.

He began by arguing that the internet is not the birthplace of networked social movements but that modern communication technology has allowed the emotionally-charged conversations that coalesce into social movements to happen over a global network in real time. The overall effect is that more people are speaking more often and responding to issues raised by people in adjacent communities more quickly than ever.

However, he takes care to point out that social movements, which he defines as “resistance and counteraction by citizens who do not feel included in automatic reproduction of urban structures” have been the key “levers of social change” since society began. Institutions and ideologies have always toppled because of pressure from people who feel that these institutions aren’t including them or meeting their needs. But because these social movements are limited (and shaped) by the forms of communication available to citizens, in the past, social networks have been more localized. They spread through existing familial and local economic networks, so they moved much more slowly than social movements do in modern society, where anybody with an internet connection can follow complete strangers from around the world on Twitter.

As a speaker, Castells was downright bubbly, brimming with one-liners that end in serious punch lines (“Can you imagine Brazilians protesting World Cup soccer?” Pauses while the audience laughs. “Well they did with the tagline, ‘We would trade 10 stadiums for 1 hospital.’”). I wasn’t very familiar with his work, but it was easy to see why he is one of the most decorated sociologists in all of academia. He was consistently funny and insightful, despite the fact that we was speaking in liberal-arts lingo.

His talk was mainly an overview of trends that he had noticed across various social movements in the last five years. Despite the widely varying demands and motivations behind social movements that have organized themselves over Twitter, Castells pointed out that “One word is repeated in every language: dignity.” Social movements, he posits, are the reactions of a population resisting the daily acts of humiliation perpetrated on them by the ruling party.

These movements are also leaderless. They occur on decentralized digital spaces where participants can interact with each other. If certain individuals are arrested or killed or otherwise incapacitated, the movement can reorganize itself and continue.

However, these conversations do not become full-fledged social movements until they physically move into the urban space. The thousands of participants gather in their city’s most prominent streets and squares. They critique the existing institutional power structure by physically blocking its traffic.

Castells calls this hybridization of urban and digital realms “the space of autonomy”. Movements that use “the space of autonomy” are constantly in dialogue with themselves. Hashtags emerge organically and go viral. Large gatherings of unemployed and semi-employed college-educated people begin to occur in city streets. Castells stressed the idea that these social movements are non-violent. Many times the institutions respond to the gatherings with violence but “if [the social activists] respond with violence, that’s a different thing.” That’s how we end up with the civil war in Syria.

Social movements follow a predictable life cycle: they begin as conversation, gradually take on a more organized shape, culminate with protests in urban spaces, and then eventually fade away. As Castells memorably put it: “All social movements die. Either through repression or by becoming institution. It’s not the fact that they die. It’s how they die. It’s for what they die. This is decided in the minds of the people.”

This talk happened last Tuesday, just a couple of days before violence erupted at the protests in Venezuela and Ukraine, and I can’t help but wonder if the tone of the talk would have been different after those sobering events. Several audience members noted that Castells was very optimistic about the potential of internet-mediated social movements as agents of social change, and although the talk elucidated a lot of concepts I hadn’t really understood before, it still felt like an ivory tower analysis that side-stepped the issues of physical violence and attrition that institutions often inflict on protesting citizens.

I was also a little frustrated by the density of the language. Don’t get me wrong: Castells is a very eloquent speaker, and he definitely succeeded in making his ideas clear over the course of the 1.5 hour-long talk. But I don’t know how I would explain the idea encapsulated in“Space is the material support of simultaneity” if I were talking to a friend who never went to college. I could go on a tangent and tell them that for social movements to happen, many people have to be engaged in the same conversation at the same time, and that before Facebook, you pretty much had to rely on physically handing out pamphlets and face-to-face meetings to do that. So physical connection (e.g. being in the same space) allows people to have the same thoughts, same needs, and same desires at the same time. But it seems like there should be a simpler way to articulate that, and this talk didn’t really give me the tools to do that.

Still, I’m glad that I stepped outside of my biology comfort zone* and went to a sociology talk. It’s easy to lose track of the fact that all of the abstract ideas and cyber-chatter we throw at each other over Reddit, Twitter, Facebook, etc. actually describe problems that happen in the physical world,** and this talk was a really cool exploration of the relationship between physical urban spaces in cities and the virtual spaces people in those cities (and towns and farms and villages) create online.

**Maybe it’s just because I’m a biology major and I operate on the materialist assumption that the world exists, but it really annoys me when people talk about art, philosophy, ideas, etc. as if they’re separate from the physical world (as if human minds are somehow innately special and separate from everything else in the universe), but then argue that talking about ideas in relation to physical infrastructures and evolutionary pressure points is reductive (as if the human minds that generated and propogated these ideas were somehow exempt from evolutionary influence AND the time-distance access barriers that would have shaped what they saw and limited their ability to share ideas with other minds). But this is really a giant epistemological rant that would require its own post to do it justice.

Castells isn’t in the business of making value judgements about whether these movements have positive or negative effects. After all, he pointed out, even Nazism began as a social movement. His goal is simply to identify commonalities between movements and figure out how they work.

[Castells explaining why institutions have so much trouble quelling these social movements]: ‘Round up the usual suspects!’ doesn’t work here. [Social activists] debate without necessarily having any formal leadership.

Audience member: Do you think that cultural difference affects the effectiveness of these movements? For instance, when I was at Occupy Wall Street, I remember talking to people who were annoyed, and saying things like, “Why are these people blocking the street?’ or were getting bored and giving up. Is it possible that one of the reasons the Occupy Wall Street movement was less successful was because it was part of “an individualistic American culture that has a hard time enjoying being together”?

Castells: Well, the Occupy movement was successful in terms of raising awareness of inequality, and of course, there are cultural differences but these movements are very similar with regard to their practice and their structure.

I remember where I was when the protests broke out in Brazil. I was in Sao Paolo, giving a lecture to a room full of very establishment students and professors. They were saying, “Oh, this would never happen in Brazil because we are so indivdualistic”, but then a guy came running in and said. “The street is blocked!”

Tl;dr: Social movements use both online spaces and physical urban spaces. They also share the traits of being leaderless and anti-establishment.