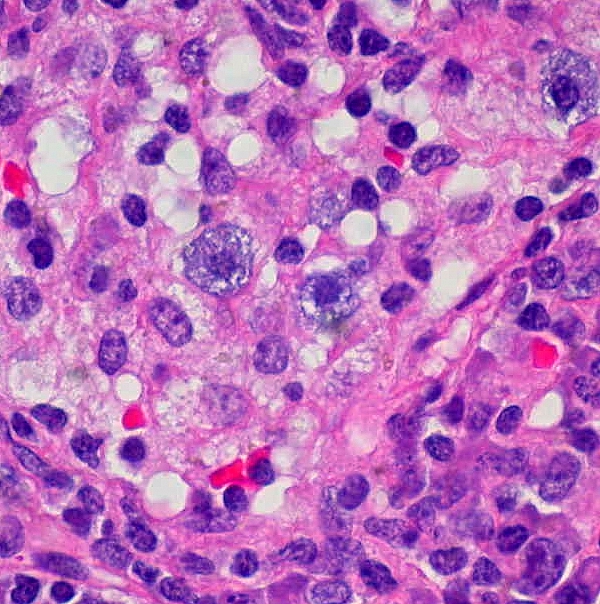 [Mast cells from a sinus stained in blue. Image via Wikimedia Commons & CC 2.0]

On July 10, 2010, a DC restauranteur came down with what seemed to be food poisoning. He had no energy and no appetite. Rashes flared up. He could barely get out of bed. First hours and then days dragged by without any relief from the symptoms.

The restauranteur’s family sought out doctor after doctor, until finally they were referred to a lab at the NIH (National Institutes of Health) that studies how allergies pass down through families.

[Above: An NIH-produced video about MCAS and Milner’s research into mast cell activation genetics.]

Unfortunately, most treatments for MCAS aim at the symptoms, not the root cause.  But the NIH team delved deeper into the genetics and found a pattern:  many MCAS-related symptoms run in families.

And oddly enough, hyperflexible joints, dysautonomia, and baby teeth that fail to fall out also ran in many of those families.  [Correction 6/15: A commenter has pointed out that “hyperflexible” and “hypermobile” are not interchangeable terms. The term “hypermobile” refers to joints that can move outside the typical range of motion due to laxness in ligaments. “Hypermobility” is also sometimes called “double-jointedness.”]  Many of these symptoms skipped generations, only showing up occasionally in individuals, but genetic sequencing revealed the correlation wasn’t coincidence.

In October, NIH scientist Joshua Milner and his team described the  genetic disorder in a paper in Nature Genetics. According to the team’s paper, 4-6% of the U.S. population has the genes that predispose them to this syndrome–which has been tentatively named alpha-tryptasemia or “alpha-T”.

The symptoms can be cryptic and unrelenting: Dizziness, chronic pain, irritable bowels, and fainting. For many patients with these conditions, there’s no explanation and no treatment. “These [symptoms] are really all triggers to get an eyeroll from a doctor,” said Milner. But for a sizeable portion of population, these seemingly unrelated problems might be part of the previously undiscovered genetic disorder.

Unknowingly, patients have been struggling to manage this condition for years without being taken seriously by doctors. The symptoms associated with alpha-tryptasemia are what doctors call “nonspecific” or “unspecific,” meaning they could be caused by just about anything.

The symptoms vary quite a bit person-to-person, making it hard to spot. Often, symptoms are mild enough that people just ignore them or don’t think to mention them on the forms they fill out at the doctor’s office. In some cases, the symptoms don’t flare up until a traumatic event in adulthood, Milner says, based on his conversations with patients.

In addtion to MCAS, some people with hypermobile joints receive diagnoses of Ehler-Danlos Syndrome (Type III), and others who have problems with fainting and dizziness are diagnosed with POTS (Postural Orthostatic Tachycardia Syndrome).  EDS and POTS often occur together, but until recently, the medical research community hadn’t paid much attention.

“Patients are almost universally told, ‘It’s all in your head,’ which is awful,” said Milner.

However,  the genetic analysis revealed that many people with MCAS, EDS-III, POTS, or other unexplained autoimmune problems have duplicate (or even triplicate) copies of gene that codes for a molecule called alpha-tryptase.

Alpha-tryptase is one of the signalling molecules that mast cells release. Doctors most often test for it when confirming allergic reactions, but tryptase also acts on connnective tissues, mast cells, and blood vessels, Milner says.

Its roles in connective tissue and immune response aren’t the only evidence that alpha-tryptase is the culprit. The gene is located in a stretch of DNA that is particularly prone to copying a section of itself and then pasting the copied DNA back into the chromosome.  As a result, some people end up with two or sometimes three copies of the gene on a single chromosome. The study found that people with more copies of the alpha-tryptase gene tended to have more problems.

In the study, the NIH researchers tested patients, their relatives, and about 200 people from the general population. About 1 in 20 people from the general population sample had elevated tryptase, and interviews revealed that many of those people had symptoms such as chronic pain and unexplained gastrointestinal problems. In many cases, the symptoms were so mild that people simply shrugged them off as signs of stress.

(And it’s worth noting that many people with genes for alpha-tryptase don’t seem to have major problems with it. The variability in symptoms and their severity is a big part of why the syndome has gone undescribed for so long.)

About a third of people don’t make alpha-tryptase at all. (There are five other forms of tryptase encoded in the human genome.) Since alpha-tryptase appears to be nonessential, it may be possible to target or counteract it in people whose mast cells make too much.

Treatments for alpha-tryptasemia are still years away.

However, Milner says that just knowing there’s a genetic cause behind their mysterious chronic pains comes as a huge relief to patients.  The symptoms of alpha-tryptasemia aren’t life-threatening but they’re chronic, untreatable, disruptive, and frustrating.  As the number of symptoms mounts, patients become more overwhelmed, and all the while, doctors keep telling them there’s no explanation and nothing that can be done.

“When you tell people, there’s a genetic disorder behind a lot of this, patients usually start crying when they hear that, because they feel validated,” Milner said.