Inside the Pancreas: How Beta Cells Change as We Age 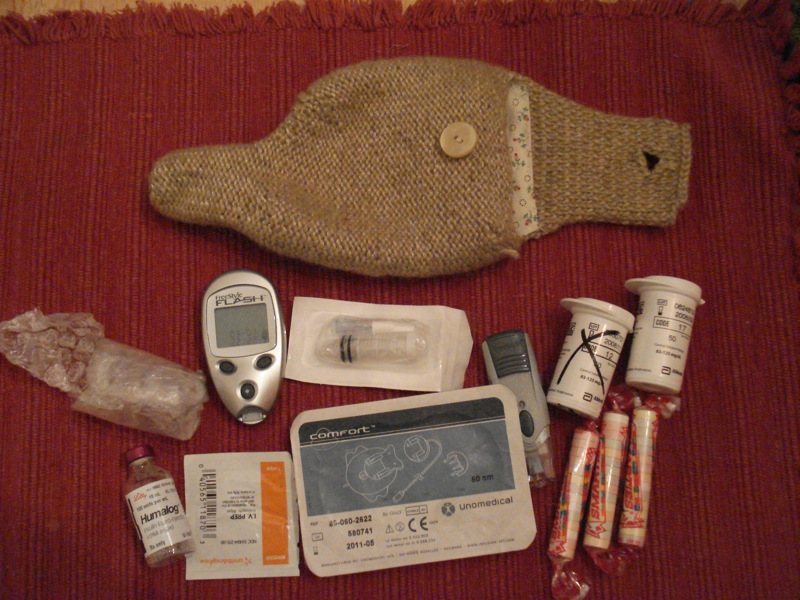 [A diabetic supply kit, complete with a knitted pouch that’s shaped like a pancreas. Photo by Erin Stevenson O’Connor via Flickr and Creative Commons.]

The box arrived around 5:00 pm. Many of Efsun Arda’s colleagues were already heading home for Thanksgiving, but Arda had work to do. As a post-doc in Seung Kim’s lab at Stanford, Arda studies one of the body’s most unknowable vital organs– the pancreas.

Although the pancreas plays a crucial role in diabetes–which impacts almost 1 in 10 Americans, according to the CDC–and although pancreatic cancer is extremely lethal, the pancreas remains largely a mystery, Kim and Arda say.

Much of what doctors do know about the pancreas comes from inference based on physiological and blood chemistry studies.

Collecting pancreas samples from living people is extremely risky and highly impractical. The pancreas itself is a large gland, full of active enzymes, nestled in a tough-to-reach spot behind the stomach. The enzymes inside the pancreas itself are “like a pack of wolves” Kim says; the slightest damage will cause the organ to start digesting itself, which would likely kill the patient.

Consequently, most studies that peek under the pancreas’ hood rely on cadavers.

This study was no exception. The researchers worked with an organ donation network that can spring into action, isolate the “islets” that contain the insulin-making cells, and then ship the islets to Stanford overnight for further cell sorting and analysis. For each pancreas, they have a window of 12-16 hours to collect data before the pancreas digests itself into uselessness.

“We have to be on call all the time, almost like doctors,” says Arda. Because the researchers never know when a suitable donor is going to die,  Arda and her colleagues often end up working strange hours.

When a package with the islets arrives, the lab’s first task is to separate the insulin-producing beta cells from their neighboring alpha cells. Prepping the cells for the separation process takes 4-5 hours, as does the separation technique itself.  When the donor cells arrived before Thanksgiving, Arda ended up working through the night,  until about 5:30 am on “Thanksgiving Eve”.

“Especially the islets we obtain from deceased children are rare, so every time we receive tissue, as a researcher I feel grateful for the opportunity to study them,” Arda wrote in an email to me. “But at the same time there is always a sad feeling when I first open the package and stare at the islets swimming in the plastic bag of media.”

(And yeah…Arda says she relates to that Radiolab episode about the parents tracking down all the different labs that used their deceased son’s organ donation material a lot. Listen to it, when you get a chance, because it’s one of Radiolab’s best episodes, imho.)

Fortunately, Kim and Arda’s work has yielded some intriguing results.  In a study that debuted Cell Metabolism last month, they looked at which genes pancreatic cells were using most often and how that gene use (or “gene expression”) differed in donors of different ages.

They found over 500 genes, where gene expression levels in the pancreas change as we age.

“You use beta cells for a long, long time,” Kim explains.  “Cells function largely in a dynamic way; they have ups and downs….If at one phase of a cell’s trajectory when it needs to grow, the genes and the proteins that regulate that need to be active.  Later on, the cell decides it’s going to stop growing so it mature and function properly–like a teenager–and it’s going to take those proteins that are needed for growth and turn them off,” he added.

Kim says  that life-cycle-wise, beta cells are kind of like neurons. During childhood, the body builds a lot of new neurons (and beta cells), but in adults, growth of new neurons is pretty rare and only happens in small amounts. Most of the neurons you use as a grownup were born many years ago. The same likely holds true for our insulin-making beta cells.

Researchers have strongly suspected that it takes a long time for beta-cells to grow up, but Arda and Kim’s study suggests an even longer maturation time than most. They found that the islets in a nine-year-old’s pancreas are still growing and produce far less insulin than adult pancreases do.

Those changes could go a long way toward explaining why diabetes risk is so closely tied to age, Kim says. Something about the way older adults’ beta cells use their genes may render them slightly more vulnerable to diabetes.

The longer clock might also explain why many attempts to build synthetic beta cells–substitute insulin-factories for diabetics–haven’t worked super-well; the lab-grown cells simply may not have had time to mature.

Understanding the gene expression markers that set healthy beta cells apart from unhealthy ones would be a huge boon for diabetes research. Unfortunately, like insulin and beta cells themselves, donated pancreases remain a precious commodity.

“I hope that people will realize how important it is to study human tissue,” Arda says. “We have these model organisms [like mice] but we can only really understand disease in human tissue research.”

Studying the pancreas in a lab is harder than you think…But these researchers did it.