How to find a planet that could hold life – Recap of talk by Dr. Sara Seager 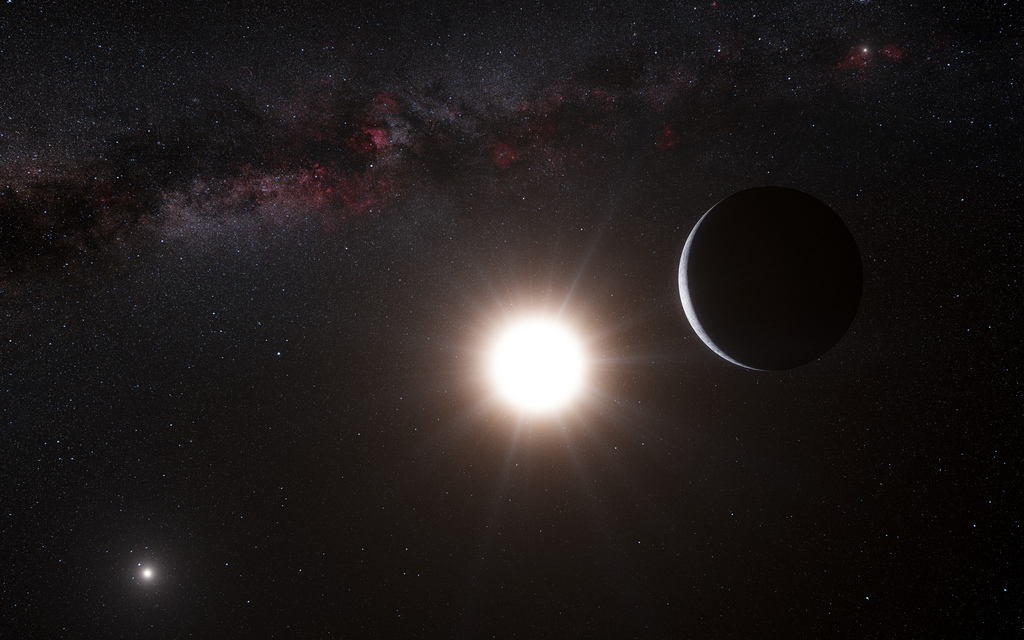 Exoplanets and the Real Search for Alien Life

Dr. Sara Seager is an astrophysicist and MacArthur Foundation Fellow who is looking for signs of life on other planets. She doesn’t listen for alien radio signals; she looks at sizes, colors, and behaviors of visible exoplanets and tries to figure out what chemicals are in those planets’ atmospheres.

The presence of small-molecule compounds that are easily broken apart (like O2) could indicate that there are life forms on the planet that are constantly producing said compounds. Without the organisms that keep adding O2 to our atmosphere, we would run out of it pretty quickly. Even if we weren’t breathing it in, other molecules would still cozy up to the oxygen atoms and break them apart. So it’s a good thing our biosphere is home to an awesome team of leafy green autotrophs who excel at producing O2.

So Sara Seager and others in her field are brainstorming ways look for chemicals that could indicate the presence of life. In most cases, the first step is just finding a way see the planet better.

This talk was aimed at an audience of MIT grad students from all departments, so the overall tone “Here’s a fun overview of one of the topics that probably got you really excited about science as a small child” with a few little chunks of “But seriously, here’s a problem that could turn into someone’s post-doctoral thesis” thrown in for fun.

She started with a basic explanation of the Goldilocks zone (the distance from a star which would allow a planet to maintain liquid water, which varies depending on how bright the star is and how big the planet is. Other factors matter, too, but brightness is usually the key factor) and pointed out a few of its limitations. Namely, it’s hard to tell how hot or a cold a planet is without knowing how well its atmosphere traps heat. To know that, you need to know what’s in the atmosphere and how thick it is.

Astrophysicists have found 715 exoplanets (planets that orbit stars other than our sun) by analyzing data from the Kepler telescope, and they could still find more. They find planets by looking for tiny moving dark spots that cross the paths of starlight. If those dark spots repeat at least 3 times over regular intervals, it means there’s a good chance they’ve found a planet with a regular orbit.

The caveat for this technique is that because Kepler hasn’t been recording data for that long (only about 4 Earth years), only planets that are relatively close to their stars have completed the required three full orbits that the astrophysicists need to confirm its existence. (This limitation was further complicated by the fact that Kepler’s reaction wheels, which are crucial for aiming the telescope, broke. So Kepler’s handlers haven’t had full control over where the telescope is looking. Still, they’ve managed to glean a lot from Kepler’s telemetry.)

The other issue is that Kepler images only reveal the planet’s silhouette (plus maybe a faint atmospheric ring around the planet.) It’s not a lot to go on, but stars are so much brighter than planets that you really can’t see much else without finding a way of blocking out the starlight.

Dr. Seager is one of the key proponents behind The Starshade Project. The starshade would be a massive sunflower-shaped disk that astronomers can maneuver such that it blocks almost all of the light from a target star. The planets would be visible through the spaces between the starshade’s petals as they orbited around their sun. Dr. Seager explained that it’s basically the same idea as holding your hand out in front of your face to block the light from the sun, when you’re trying to look at the sky.

The starshade is one of several different projects that will help exoplanetologists see their study subjects better. (Seager is also involved with George Ricker’s TESS and namechecked the James Webb Space Telescope as a source of new exoplanet data.) Funding for starshade isn’t 100% certain, but politicians and business investors get really excited about space stuff, and Dr. Seager is certain that within the next decade, we will see the launch of another planet hunter telescope that will tell us even more about extrasolar planets.

And Kepler has told us a lot. Our existing theories of planet formation are based on one example (our own solar system), and based on the Kepler data, it looks like our solar system might be kind of an odd duck. We have four inner planets (all of which are small and rocky), an asteroid belt, and then a string of massive gas giants that get progressively smaller as you get further away from the sun.

For a long time, planetologists assumed that Neptune (which is only four times as big as Earth) was kind of an unusual case, but Kepler has found dozens of sub-Neptunes, which are structured like gas giants but are even smaller than Neptune. They’re one of the most common types of planets in our galaxy, and we’ve never suspected it, because we don’t have any in our backyard. Studying the formation of exoplanets could lead to new insights about gravity (plus a lot of really cool concept artwork).

I’ve never been good at understanding the applications and nuances of theoretical physics, but I love learning about planet and star formation theories. (It takes me back to fourth grade when I wrote a series of stories from the first-person perspective of a yellow sun-like star watching its planets form and eventually, watching life forms take hold on one of its rocky planets.) The idea that stars and planets have their own unique origin stories is, to me, a lot more interesting than pondering the origins of the universe itself. (Although, I must give mad props to the guys who found the gravitational waves this week.)

The other reason I love planetology is because I like to do thought experiments where I try to imagine what life forms would be like on other planets and how their biology and surrounding environment would shape their culture. (In eighth grade, I wrote a story about a society of sightless sea serpent-like creatures who live inside Jupiter’s moon Europa and believe that Europa’s surface ice constitutes the edge of the universe. My protagonist was a young scientist who discovers radio waves coming from outside the ice and must try to convince a closed-minded society where the concept of light doesn’t exist that radio waves are real and caused by large objects outside of “the edge of the universe”…I should probably dig out some of these old stories and revise them, because I could probably do a better job with them now. Also, if this sort of thing sounds interesting to you and you haven’t read Isaac Asimov’s “Nightfall”, why are you still on my page?)

My inner astrobiologist doesn’t get fed very often, so Dr. Seager’s talk was kind of a smorgasbord for that side of my psyche. She got the audience involved by asking questions like, “What do you think life would be like on a planet that’s tidally locked?”

Other people in the audience were asking questions about how tidal locking would affect a planet’s habitability to humans, but my mind was already racing, thinking about how a culture that had grown up on a tidally locked planet would think about time: (I was assuming that the day side would be the Goldilocks side). Would they have growing seasons for agriculture? If they had a Sun god, would they go on pilgrimages to the place where their Sun shone most brightly? Would they notice their sun getting bigger and smaller as the perihelion came and went and how would that affect their creation myths? And if they’re in a tight orbit where their year is only a few weeks long, would that mean they would think about their seasons as being more like days​? (Would they say things like Saturday is the hottest part of the cycle in the Northern hemisphere but the coldest part of the cycle in the Southern hemisphere? Of course, their planet doesn’t spin, so they wouldn’t have days like we do…) Would they sleep? Would their oceans be stable?

From a sciencey perspective, my favorite part was actually when Dr. Seager went into chemistry mode and started explaining why the prevalence of different greenhouse gases in the atmosphere would affect the presence of water on the surface of planets. She gave us a full run-down of the runaway greenhouse effect theory, which says that planets with liquid oceans may lose their oceans if they get overheated. H2O water vapor is actually a pretty nasty greenhouse gas, and if the oceans start to evaporate, the effect can snowball pretty quickly, leading to the loss of all liquid water on the surface.

You could tell Dr. Seager was really excited to be giving this talk to an audience full of people who actually understand what a dipole moment is. It was also fun to hear her telling stories about how biochemists sometimes roll their eyes when she tells them her ideas about what chemicals she wants to look at as possible biosignatures and how astrophysicists debate amongst themselves about whether it’s worth sending probes to exoplanets. (“It’ll take so long to get there. Why don’t you wait until engines get better?”…”But if you don’t send the first probe, how do you actually get better at sending probes?”)

Dr. Seager isn’t looking for extraterrestrial life itself. She’s looking at the chemical composition of exoplanets’ atmospheres and trying to determine whether that composition may indicate the presence of life. So if we do find alien life, we’re gonna see the chemicals they exhale long before we can actually talk to them. (Unless something really unexpected happens in the next couple of decades…)

(On the possibility that alien life’s metabolic processes might produce something other than oxygen):

Audience member: What is the definition that astrobiologists use to define life? We’re always surprised by extremophiles on our own planet. Is it sufficient to make sure that we don’t overlook anything?

Dr. Seager: That’s a great question that I don’t really have to answer, because with exoplanets, we’re not concerned about what life is. What we’re concerned about is what life does. We’re assuming that life metabolizes and that there will be some chemical compounds in the atmosphere as a result of that. We’re going to have so few targets [planets] that we’re going to look for anything possible.

Follow-up question from a different audience member: Could you see pollution or evidence of nuclear fallouts that might suggest that there might be life that’s not any more intelligent than we are?

Dr. Seager (In a “Haha, but No-I have a serious answer” tone of voice): That’s something we love to think about, but it’s way downstream for us, because we’re looking at global chemicals.

(In other words, you couldn’t see local disasters like Chernobyl from dozens of lightyears away. At least not with our current telescopes.)

Tl;dr: Kepler found a whole bunch of exoplanets. Now scientists are working on figuring out how to see them better.