Vetting the Spleen: Is it a blood filter or something more? 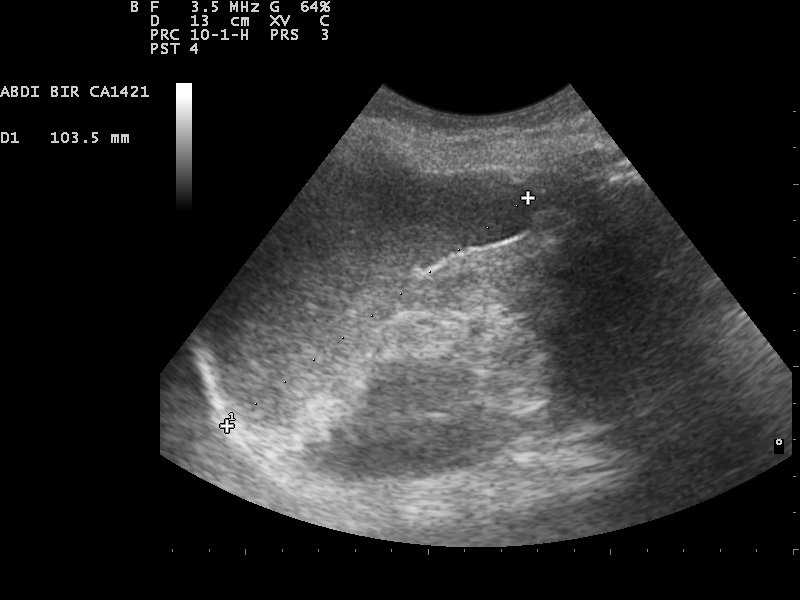 [Ultrasound of a spleen by Nevit Dilmen via Wikimedia Commons & CC 2.0]

Blood moves fast.  It only takes about 20 seconds for a red blood cell  to make a full circuit through your entire body, and your blood makes that journey thousands of times each day.

The speed of the blood stream is a challenge for scientists who study how the body copes with invading bacteria. Normally, the bloodstream is devoid of microbial interlopers, but when bacteria do break into the blood stream, they can be extremely dangerous. Sepsis, for example, occurs when the immune system tries to fight off a large number of blood-invading bacteria. And sepsis kills up to half of the people who develop it, according to the NIH.

So when bacteria find their way into blood, your body wants to take them out ASAP.  Blood-filtering organs like the liver, the kidneys, and the spleen have dedicated local immune cell task forces that help kill microbes, and of course, blood itself has loads of white blood cells on patrol.

But platelets–the globs of gunk that form scabs on wounds–also trap bacteria. When the bacteria are whizzing through the bloodstream, sometimes they collide with a platelet and get stuck to it. But according to a recent study in Cell Host and Microbe,  getting stuck to a platelet doesn’t kill the bacteria.

Instead, the platelets carry their trapped bacteria through the bloodstream until they wash up at the spleen, says the study’s senior co-author Admar Verschoor from University of Lubeck in Germany.

Spleens are full of holes, but that’s design. Like many filters, the spleen’s job is to catch large contaminants or invaders, without stopping the blood flow. Most bacteria are small enough to pass through the spleen’s holes without getting stuck, but most platelets are not, says Verschoor.

If true, that could mean that spleen-dwelling immune cells are able to get close-up looks at the offending microbes. “When the bacteria are not killed so fast, they are now available for the dendritic cells in the spleen,” explains Verschoor.

However, dendritic cells can’t work their magic unless they have something to “remember”.  Which is where Verschoor says the spleen comes in….

When bacteria breach a blood vessel wall, killing them quickly is key. However, if 100% of the bacteria are killed by first responders, the longterm immunity cells lose their chance to study invaders up close and personal. Verschoor thinks the bacteria-trapping platelets allow the immune system to have the best of both worlds: most bacteria get killed immediately, while a few are captured by platelets and carried to the spleen for further analysis.

He terms this process “bacterial clearance, fast and slow.”

In other words, the spleen is kind of like a science lab. Its purpose may not be obvious at first glance, but

Up until this point, pretty much everyone thought there was just one system for clearing bacterial infections out of the blood— the first responder cells that kill quickly and ask questions later.

On one level, this result makes sense. It lines up with the fact that you can live without a spleen, although spleen removal does increase your risk of infection. The first responders still kill the majority of bacteria in the bloodstream, but the spleen is working on building up longterm immunity and memory

To track the capture of bacteria by platelets, Verschoor and his colleagues used an ingenious technique where they bred mice with glow-in-the-dark platelets. Normally, that wouldn’t help much, because mice aren’t translucent. Except for one body part–their ears.

Recording movies of the glow-in-the-dark platelet action in the blood vessels of mice’s ears meant the researchers could observe the bacteria-killing process without cutting the mouse open.

But since this paper claims to discover a previously unobserved immune system process, I wanted to run it by a second source before posting.

I got in touch with Paul Kubes from University of Calgary, and he was a bit skeptical.  Specifically, he thought it was a bit weird that the study co-authors were describing an elaborate spleen-based system without taking images of the spleen directly.  (They took pictures of the lab mice’s liver, which is an equally deeply buried organ.)

When I asked Verschoor why they didn’t take images of the spleen via email, he countered with:

Judging from a Google image search, Verschoor’s not wrong about the spleen being structurally complex: 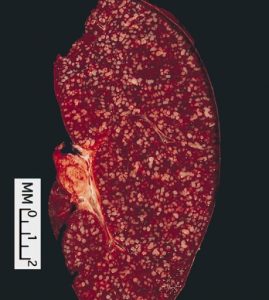 [A dissected spleen that has a cancer called folicular lymphoma. Photo via The Armed Forces Institute of Pathology (AFIP) and Wikimedia Commons.]

The spleen serving as a research lab where dendritic cells can train on live bacteria makes for a compelling story.  But is it true?

In the Cell Host & Microbe study, Verschoor and colleagues also showed that when they blocked the platelets’ ability to trap germs,  the dendritic cells had trouble growing and learning.  However, that’s still somewhat indirect evidence. And we don’t know whether the same “fast and slow clearance” principle applies across all species of bacteria.

Based on my reading of the paper and my conversations with Verschoor and Kubes, I’d say, “Yeah, there’s a chance the spleen might be our immune system’s NIH headquarters. But we need more evidence.”  (Of course, I’m not a scientist. But “more evidence needed” is a call they almost always make.)

Much like the pancreas, the spleen is an organ we don’t know all that well.  For the time being, we can be pretty sure that it’s a blood-filter that helps boost longterm immunity.  (Havard Med School clowning aside…)

New study suggests that the spleen may be a hub for the immune cell training.  In other words, spleens are kind of like science labs.

Platelets trap bacteria, the spleen collects them, and the immune system learns. (We think. It’s hard to be sure.)